It seems a little frivolous to be working on a blog post, especially with what is currently going on around in politics, but I will at least try to make it relevant.

For this edition of Things You Might Not Have Seen, I will talk about a children’s book called The Phantom Tollbooth by Norton Juster. How could this book possibly have relevance to what is happening today? I am glad you asked that question. 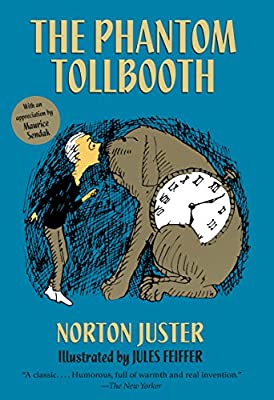 We find Milo, a bored ten year old, who is disinterested with everything in his life. He doesn’t have any friends. He finds no joy around him. Not in his school lessons, not in his surroundings. One day, he receives a gift of a magic tollbooth and, having nothing better to do, drives through it in his toy car, transporting him to the Kingdom of Wisdom.

The magical kingdom was once prosperous, but now is troubled. The source of the kingdom’s trouble are two kings who refuse to listen to one another. One king wants to declare words to be more important than numbers. While the other says that numbers should be more important. They both have locked the two princesses, Rhyme and Reason, away in the Castle in the Air.

It is Milo’s quest to bring Rhyme and Reason back in the kingdom and make the two warring kings listen to one another. Without Rhyme and Reason, the Kingdom is under threat of being taken over by dark forces that thrive on chaos and disorder.

See the relevance yet? Lol

I love fantasy stories like these for many reasons, but I will talk about the message in the Phantom Tollbooth that was especially moving.

The Phantom Tollbooth is an imaginative story with wonderful imagery. I especially loved how daily things were seen with a different lens, where a sunset was a symphony of colors played by an orchestra.

I hope that you liked today’s blog post. Thank you for reading! 😊 Stay safe and healthy

I live in Toronto, Ontario. I love living in my multicultural city. My hobbies include writing, reading, painting and photography. I adore classic books and hope to someday emulate the books that I love and cherish. View more posts