For this edition of Things You Might Not Have Seen, I will talk about the 2020 animated movie, Over the Moon. This is a children’s animated movie that tackles a serious topic: a child grieving the loss of a parent.

Fei Fei had a lovely family with two loving parents. Her life turns upside down when her mother falls ill and passes away. It seems the world had forgotten her mother and the stories she told, especially the legend of the Moon goddess Chang’e. The Moon goddess’ love story has a special place in Fei Fei’s heart, which she thinks is a story of one true love like her parents’ love to one another. Four years after her mother’s death, she is shocked when her father gets engaged to another woman and that drives Fei Fei to find the moon goddess to make him remember. She thinks if she can prove the moon goddess is real, her father won’t remarry. Fei Fei doesn’t want anything to do with her new step-mother or step-brother, Chin. Chin is a rambunctious boy with a big heart, eager to be her baby brother. He already considers her as his older sister and part of his family.

Fei Fei designs a rocket that resembles a Chinese paper lantern in the shape of a rabbit and uses fireworks to boost her speed. She takes her bunny with her, the last gift from her mother. Her rocket almost succeeds but Chin snuck aboard her rocket and she didn’t calculate for his weight. They begin to crash to Earth but the rocket is captured in a mystical beam and taken to the Moon. They crash land and meet playful spirits of Lunaria, a kingdom made of light on the dark side of the moon and home to moon goddess Chang’e. 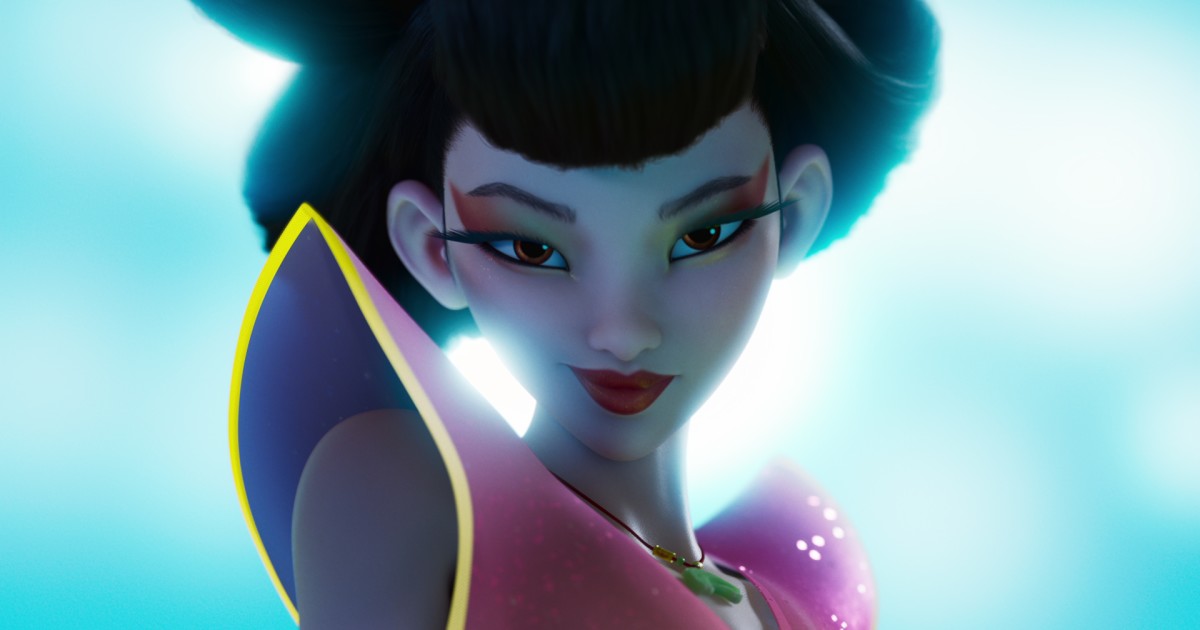 Chang’e is very different from what Fei Fei imagined her to be. She is sassy and popular like a popstar. Chang’e is carrying her grief with her and tries to hide it beneath bravado, just like Fei Fei. The most poignant portrayal of grief is when Chang’e and Fei Fei both lose hope and enter an inpregnatable state of sadness; Chang’e when she has no chance remaining of being with her love again and Fei Fei when she sees a vision of her mother’s death. At this moment, it is their friends and Chin who break the wall to get through to them. Chang’e and Fei Fei encourage each other to find the love all around them. They both realize they must move on from their tragedies for the people who love them.

I liked the movie’s blend of traditional with modern Chinese culture. The movie could have explored Fei Fei and her father’s relationship a bit more at the end. It is a good movie showing the many sides of grief and for showing that healing comes from love.

The movie is a musical and the songs were catchy. You can see a few of them below:

I hope you liked today’s blog post. Check out Over the Moon for your next animated movie.

It has been one year since I started this blog 🥳 I have discovered many new things and shared them here with you. I hope you discovered something new from them and were inspired too.

Thank you everyone who take time to read my blog posts and/or my books 😊 I appreciate your support in my writing journey.

I live in Toronto, Ontario. I love living in my multicultural city. My hobbies include writing, reading, painting and photography. I adore classic books and hope to someday emulate the books that I love and cherish. I have a newsletter you can join at www.subscribepage.com/AishaUrooj Hope to see you there! 😊 View more posts